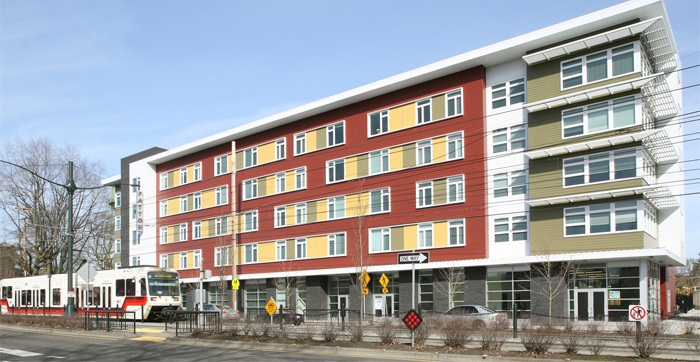 With the growing interest in urban living and investment in transit-oriented development (TOD), cities are becoming more expensive than ever. So how can we ensure low-income communities have access to transit and opportunity? In our recent study for the Poverty and Race Research Action Council, Ian Carlton and I conducted a national scan to gauge how far the field of equitable TOD has come and identify opportunities for further improvement.

The study was inspired by recent federal action from the Federal Transit Administration to incorporate affordable housing into their evaluation metrics of the New Starts transit grant applicants. While a number of local, regional and state governments have already developed innovative funding and incentive programs to encourage equitable TODs, we were curious about the potential impact of such an action at the federal level. Will federal action make TODs more equitable in the future?

To begin to answer this question, we analyzed the proximity of low-income housing to existing rail stations. We found that only 15% of affordable housing developments subsidized by the Low Income Housing Tax Credit (LIHTC) are within a half mile of a transit station. In contrast, over half of newly built transit stations have been located within a half mile of existing LIHTC developments. In other words, transit has done better at locating near affordable housing than vice versa. This may be due to the need for dense neighborhoods to support ridership, as well as the housing policies that channel subsidized housing to such areas.

Our findings call into question the long-term stability of the few equitable TODs that have been successfully established. How much will the recently established evaluation criteria of the New Starts program shift the landscape? Given that over half of transit stations already go into neighborhoods with subsidized housing, it may be fruitful to focus efforts on funding new affordable units in TODs, as cost is often the limiting factor in the affordable housing industry. This is especially true in TODs given the extensive evidence showing that transit stations increase property values of surrounding neighborhoods. Furthermore, additional efforts should be made to develop affordable housing in high opportunity TODs, of which we have found few to date.
And how do we stabilize the few existing affordable TODs, given our finding that they are more likely to experience gentrification pressures? In a related project, I am studying the role of transit investments in neighborhood gentrification and displacement of low-income households in the Bay Area. Through this project, we are developing a toolkit to help communities identify early warning signs and identify policy packages to better prepare for and prevent displacement from occurring.

More research and action is certainly needed. As our investigations into three case studies indicated, even where communities have been successful at developing affordable housing near transit, ridership may not be meeting expectations; the theoretical benefits of affordable housing developments near transit may therefore not be fully captured. Affordable TOD appears to be a laudable goal, but one that is not yet fully understood. It will be important to replicate similar studies in the future to determine if recent policymaking, new funding programs and other efforts aimed at fostering equitable growth in transit and opportunity-rich neighborhoods are successfully moving the needle.