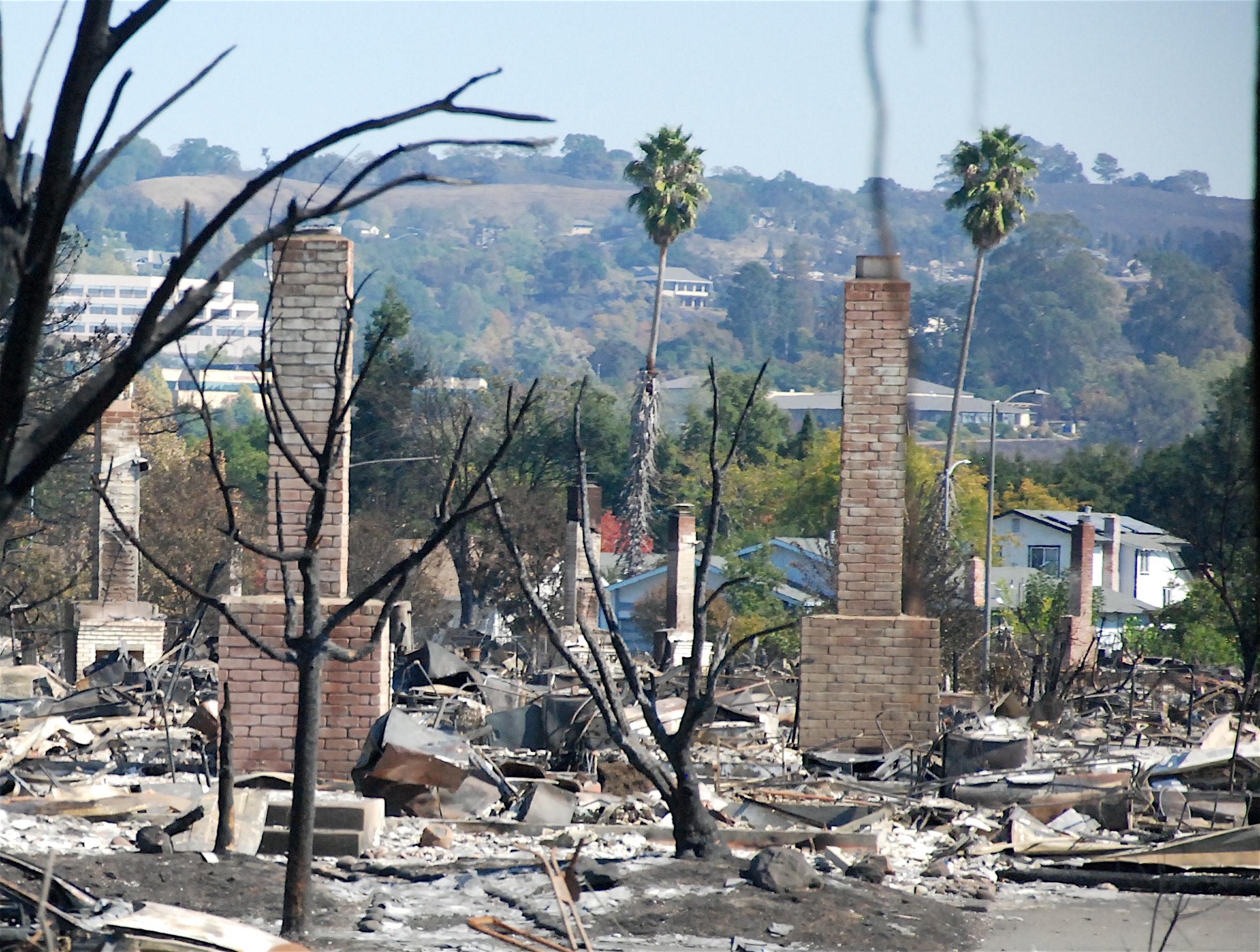 The Bay Area is still reeling from the devastation of the recent fires in Napa and Sonoma counties, which tragically took the lives of 43 people and forced over 100,000 to evacuate their homes. The fire destroyed an estimated 8,900 buildings, and officials report that 5 percent of Santa Rosa’s housing stock is gone. While the the human costs of this disaster remain far more salient than the loss of property, the loss of homes will have profound consequences for individuals and families in these counties, as well as ripple effects for displacement in the greater Bay Area.

We cannot talk about the fires without acknowledging human-driven climate change. Rising temperatures are responsible for half of the area in the western U.S. that has burned over the last 35 years. Here in California, a wet winter followed by our warmest summer in recorded history created a lot of kindling for the fast-moving fire. Furthermore, these fires began in the “wildland-urban interface,” a high-hazard zone that has seen substantial residential development over the past two decades, bringing more people and homes in close proximity to high fire risk areas.

Before the fires, Napa and Sonoma counties were already experiencing significant housing pressures. The two counties have built less than half the housing needed to keep up with population growth, leading to low vacancy rates and rising rents. Meanwhile, a number of cities in the North Bay have rejected rent control and other housing laws that would have helped protect renters from displacement. And while Napa and Sonoma are best known for expensive houses and vineyards, they are also home to people of various income levels struggling to afford housing, including workers in retail, manufacturing, agriculture, food service, and healthcare.

The fires exacerbated existing housing pressures and inequities. For example, many of the over 20,000 undocumented residents of Sonoma and Napa counties avoided shelters for fear of federal agents and deportation, instead sleeping on beaches. Mixed-status immigrant families also fear applying for FEMA benefits, since the agency’s intake form states that their information could be shared with Immigration and Customs Enforcement (ICE).

Once the immediate disaster passes, some families will be able to go back to their homes, but many others will be left without a place to return. For homeowners, insurance coverage may not be enough to rebuild and toxic ash could make reconstruction at some sites difficult and time-intensive. In December 2015, the average maximum fire coverage limit for homeowners in Sonoma County was $452,541. Even well-insured families working to rebuild after the Lake County Fire in 2015 faced barriers in meeting the strict timelines imposed by insurance companies, as well as challenges navigating new building and safety regulations and bureaucracies.

To recuperate losses for their belongings, families who rent need to have purchased renters insurance, but less than half of renters have this (41 percent nationally in 2016). Renters insurance does not provide relocation funds in the event of a natural disaster. While landlords are usually responsible for providing relocation benefits, they are exempt from such a requirement in the event of a natural disaster, such as the fires (Health & Safety Code § 17975.4). Another major concern for people who rent is the ability to return to their previous residence once landlords make repairs or rebuild after the fires. Municipalities with rent control ordinances generally include clauses on tenants’ right to return following a fire, flood, or disaster. No cities in Sonoma or Napa counties have these protections. The most recent rent stabilization effort by the Santa Rosa City Council was just blocked by referendum petition in September.

Without these protections in place, tenants have limited rights to return to their former homes. For people living in buildings that were destroyed, their leases are immediately terminated, and they have no right to return to the building once it is rebuilt. For buildings requiring repairs, some landlords may raise month-to-month rents beyond what the tenant can pay. Raising rents in these instances may be motivated by both the need to recuperate costs in this expensive construction market but also the opportunity to increase landlord profit. In the aftermath of the fires, landlords would need to justify any rent increase above 10 percent as directly attributable to increased costs of the landlord, otherwise the increase would violate the Governor’s declaration of state of emergency. Tenants in the North Bay have already documented price gouging, though, and for many renters, even an increase below 10 percent may be untenable. It is also unclear how long this state of emergency will be in effect. Tenants Together has put together an informative FAQ regarding tenants’ rights following the fires.

As displaced tenants and former homeowners search for housing in an already tight market, competition and rents are likely to rise. Zillow data indicated that, between September and mid-October, asking rents jumped 36 percent in Sonoma and 23 percent in Napa; analysts anticipate that rents will continue to rise well beyond prior year-to-year trends. The California Apartment Association has called on landlords to voluntarily enact a temporary rent freeze, but it is unclear how long this will last or how widely it will be adopted. As landlords have the opportunity to raise rents, tenants who were not initially displaced by the fires may be at increased risk of displacement due to untenable rent increases or evictions. Prices in neighboring communities will likely be affected also, as people search farther afield.

Families unable to find housing in the North Bay will have to choose between homelessness — in shelters, cars, or on the streets — or exodus from their community.

Looking forward, there is a clear need for rebuilding alongside robust anti-displacement strategies that center the needs of vulnerable residents. The dangers of not acting quickly and equitably are profound. Our study on the impacts of displacement in San Mateo County found that a forced move left many families homeless or living much farther away. Often, moving meant longer commutes, changing schools, and greater environmental health risks.  We can also look at the aftermath of Hurricanes Katrina and Sandy to understand the risks of natural disaster-induced displacement. There, slow government assistance, prohibitive adaptation technology, and incomplete information made it harder for low-income residents to return and rebuild their communities.

Development is an inherently slow and costly process, made worse by the current labor shortage and rising costs for building materials. Local elected officials have proposed strategies to streamline the building process and facilitate alternative types of rental housing like accessory dwelling units. Officials and advocates have also called for greater state action, such as re-establishing local redevelopment agencies to fund affordable housing and climate resilience projects. Here at the Urban Displacement Project, we have identified several key considerations to ensure that people without housing find shelter, tenants with housing are protected from displacement, and the region as a whole becomes more resilient and equitable.

Our team at The Urban Displacement Project sends our thoughts to all of those who have lost homes and loved ones in the fires. If you are able, we encourage you to give to the funds below.