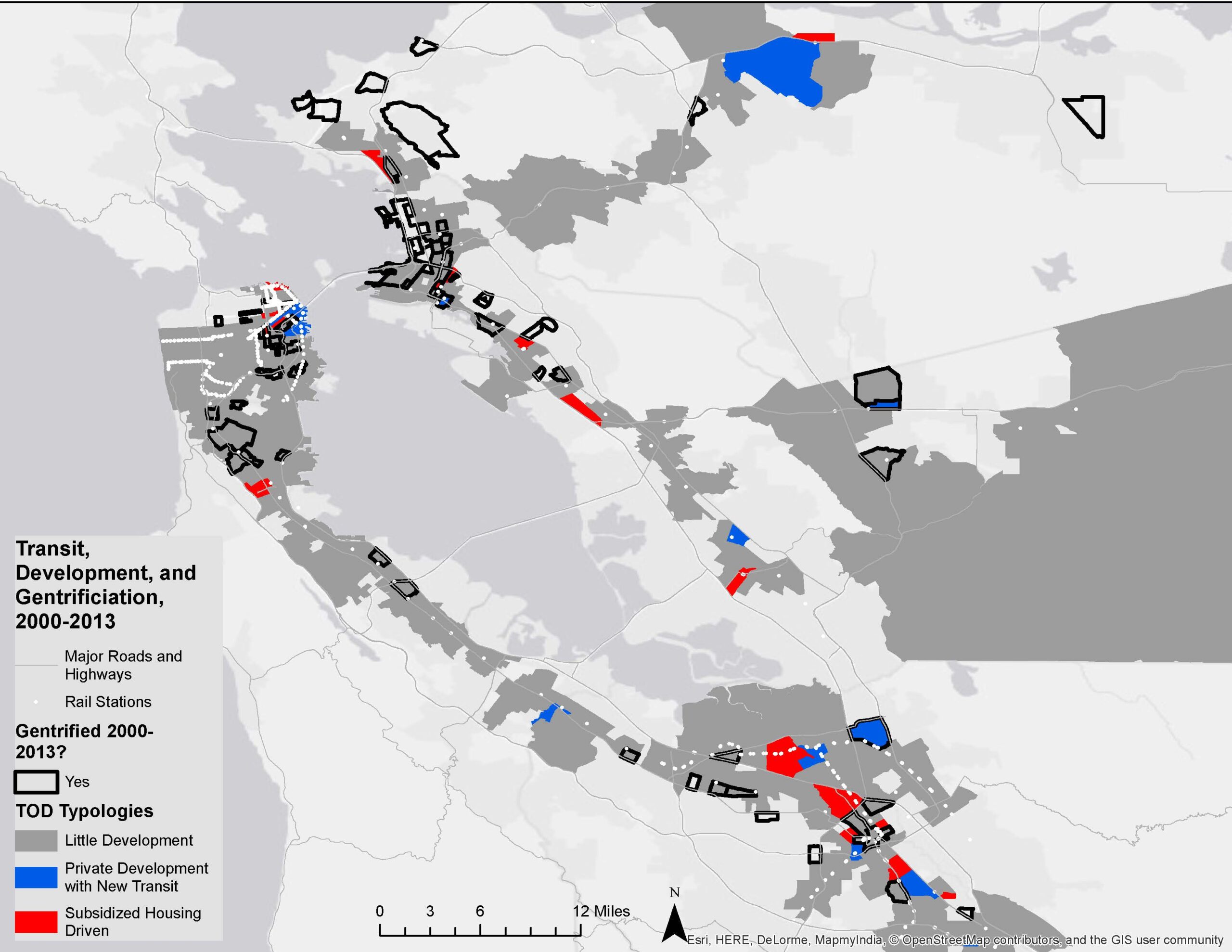 Like merchants on Geary Street concerned about the effects of new bus rapid transit on their businesses, many fear the change that a new transit line or station will bring to a neighborhood. To analyze this, our Urban Displacement Project has examined the relationship between transit investment and displacement, finding that these fears may not be unfounded: new transit can bring with it gentrification and/or the loss of low-income households.

But the intense development that many expect to occur around transit stations in the San Francisco Bay Area has not, for the most part, materialized in recent years: see the vast sea of dark grey on our map, which represents Census tracts near transit with little development between 2000-2013. Our map shows that transit-oriented development (TOD) is rare, and, where it is happening, tends to occur outside of gentrifying areas. 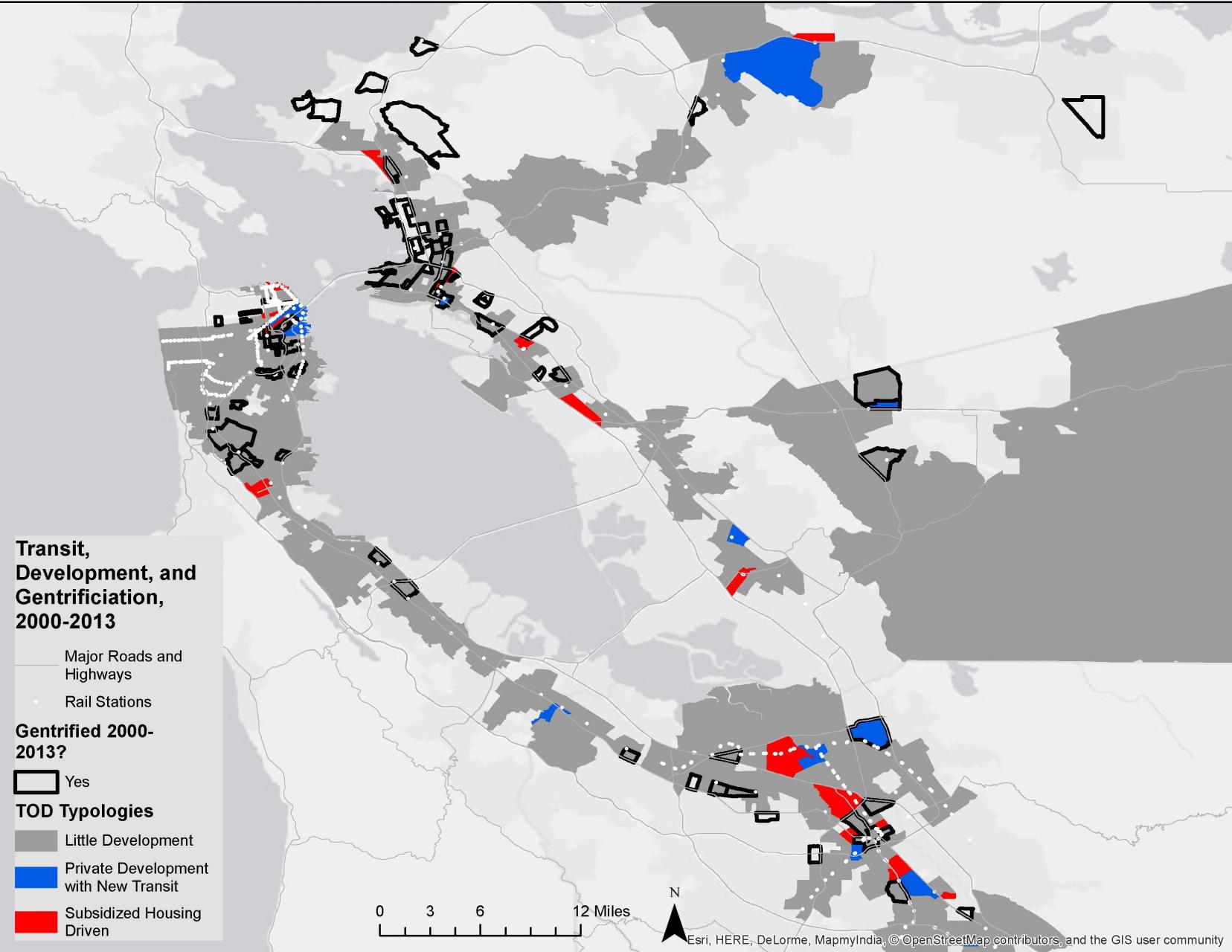 Research by our colleagues at UCLA shows a similar pattern in Los Angeles: very few neighborhoods are receiving new transit-oriented development, and the new development is often occurring outside of gentrifying areas, challenging the notion of development as a main cause of gentrification (which we discussed in last week’s blog post). 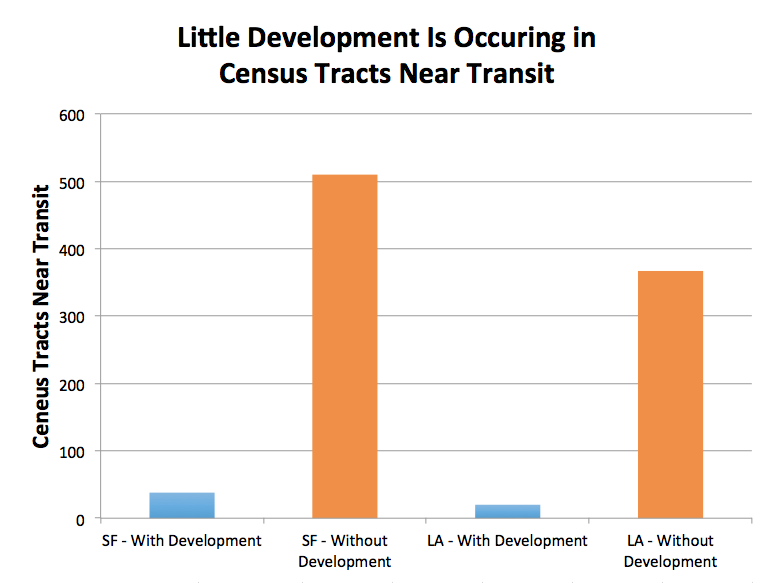 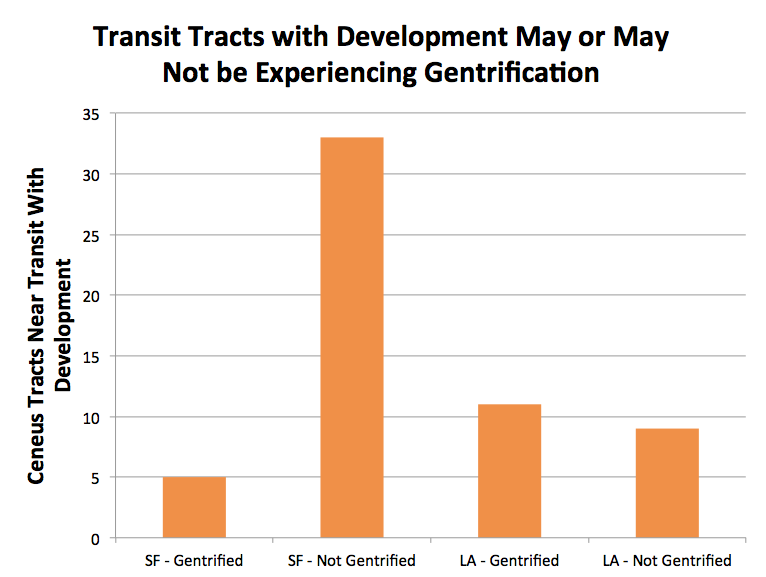 Even as Californian cities, at the urging of regional agencies such as the Association of Bay Area Governments, have identified many transit neighborhoods as Priority Development Areas, they have not changed their zoning to allow higher densities in these areas. Even assuming cities have or will raise density limits around transit, the costs of development can be so high as to deter developers from investing there. High land costs due in part to proximity to transit, high development costs due to a tight construction market, and the higher per square foot construction costs associated with building over eight stories, are three main contributors.

Infill development is also inherently more difficult than building on “virgin” land. Construction is challenging and costly on small parcels, and assembling multiple parcels owned separately creates additional barriers. Often, infill developers demolish existing middle- or low-quality housing that is naturally affordable to low-income renters, provoking displacement in the name of development. Infill development by definition means dealing with neighbors, who may wish to preserve the existing density in the area, often using the leverage of a potential legal challenge under the California Environmental Quality Act (CEQA). Although the landmark California legislation SB 375 provides an exemption from CEQA for certain projects, applying for the exemption is an onerous and time-consuming process by itself.

These factors add cost, time, and headache. While developers may see future potential in a transit neighborhood, the rents they could fetch today may not be high enough to make a deal pencil given these formidable challenges. And, developing affordable housing near transit may not be possible without deep subsidies. If instead we built a short distance away along bus feeder lines, where land costs are lower and barriers fewer, we could develop far more affordable units.

This lack of development near transit raises questions about the potential to develop more sustainable communities that allow people to get out of their cars – and thus reduce greenhouse gas emissions. SB 375 and its targets for greenhouse gas reductions are premised on the idea that we can reduce vehicle miles traveled in part through where we locate housing development. But if we can’t build denser, more walkable communities, we have little chance of success.

Our data runs only through 2013; it is possible that development in transit neighborhoods has picked up since then, or that cities have taken action to make development easier in these places. But if there is a SB 375 2.0, one of its first priorities should be incentivizing development — while mitigating displacement.